This delicate, barrel-fermented Chardonnay has a bright, golden colour in the glass. On the ‘nose’ your senses will be filled with subtle aromas of citrus, honeysuckle and jasmine combined with a pleasant nuttiness and buttered brioche. It is elegant and smooth on the palate showing great integration of the oak and fruit on the palate. Having  spent 11 months in second and third fill oak barrels, the wine has a lovely honeyed character with a well-rounded, but textured finish. Pairs well with chicken, fish or pork dishes and drinks best at 14-15 ̊C.

The 2012 harvest season was characterised by healthy, ideal growing conditions and a cool, though lengthened, harvesting period without rain or prolonged heat. As August was warmer than usual, bud burst was a week early in some blocks. Abnormally cold and rainy conditions during the second part of flowering resulted in uneven flowering and berry set, with high disease pressure, which Peter, our viticulturist, managed to control very well.
Weather conditions were back to normal in December, and less wind than usual resulted in little damage to vines than previously in previos years. January was exceptionally hot, but through scheduled irrigation the harsh effects were significantly reduced. The ripening period in February and March was further characterised by ideal weather conditions; cool and dry for slow ripening, resulting in good colour and flavour in all blocks. The dry weather also contributed to healthy grapes with minimal disease and rot. The crop quality and size was very good and for some producers one of the best years.
The Seven Springs Chardonnay 2012 was fermented and aged in second and third fill French oak and forth fill American oak, 300L barrels. Wild/natural fermentation started in stainless steel tank and two days later the fermenting juice was transferred to barrel to complete fermentation. There was no malolactic fermentation on this wine. The wine was left to mature on the lees for 11 months to aid in the development of the creamy palate. 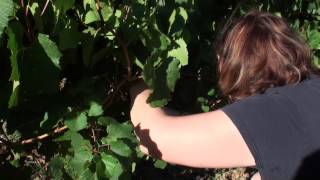 Seven Springs Syrah 2010 technical Description
This Syrah, produced in our vineyard’s cool ocean influenced climate, is refined, delightfully complex and truly fragrant. Produced from very young vines, the wine was aged for 12 months in second and third year French oak barrels. This ensures the oak influences are understated and allow the opulent dark cherry and red berry flavours to dominate, along with hints of pepper and spice. On the palate it is rich and textured.

Reviews
The Wine Gang: The Wine Gang in the UK wrote this about our Syrah on the 17th July 2012.
Seven Springs, Syrah 2010
Overberg (South Africa) Red (Screwcap) 14% ABV
Seven Springs burst onto the scene with an excellent Sauvignon Blanc last year, but this Syrah from young vines planted in the Overberg region is new. The nose is opulently rich and crammed with plum and red berry fruit. Ageing in older French barrels adding some spice and delicate smokiness, with a hint of  crisply-grilled bacon fat. On the palate it is fresh and vibrant, with real depth but bounding youthfullness and ocean-influenced clarity. 90/100
TweetCritique: The instantaneously recognisable aroma of black cherries was amazing, fairly young for a Syrah no doubt but the almost cherry menthol flavour was sublime, the lingering cherry aftertaste testament to a fine wine. The Seven Springs wine collection I tasted belied their maturity. Each wine held a surprise of its own. The construction of the wine is bold and creative and in my opinion Seven Springs wine is bound to grow even further in its popularity.
Joanna Simon – Wine and Food
Glenda Van Blerk  –  CapeTownWineBlog
Colin Smith – Grapefan
Mike Matthews, Magics Wine Guide

Description
Produced from young vines our Pinot Noir is sophisticated and full of character. It is bright and vibrant in colour with a beautiful balanced red berry flavour, a hint of spice, and an excellent finish. It is a very versatile food wine and will match perfectly with mushroom, duck, beef, lamb or pork dishes.

Reviews
Review by Decanter: Decanter Magazine had this to say about our Pinot Noir in their August 2013 edition.
Seven Springs, Pinot Noir, Overberg, South Africa  2011. This is the inaugural release of Seven Springs’ Pinot Noir. A  fabulously attractive, versatile wine, it’s laden with ripe black cherries with  leafy underbrush notes and hints of Black Forest gâteau, before unwinding to a  fresh finish. 17pts/20  (90/100pts)
TweetCritique: This is a young and vibrant Pinot Noir, light in colour and a nose that is just pure raspberry. The flavour is full and lingering with fruitiness being the prominent feature – a really special and exciting wine.
Pieter  –  Cork and Wine – Wine Spirit and fine living
Richard Saxton  –  The Grape crusader
Denise Medrano – RedWine.co.uk Very pale in the glass, this wine is bright, light and fresh. With no exposure to oak the true characteristics of the Chardonnay grape have been retained. It is delicate and well balanced with citrus fruit and melon flavours. There are also hints of the natural South African flora, such as proteas and ericas, which grow on the mountain above the vineyard. Great to drink on its own or a great match with seafood, especially shellfish and chicken.

The Chardonnay vines are planted on the cooler, south facing slope, in the lowest lying area on the farm at 200 meters elevation. It experiences a mush higher water table than other parts of the vineyard and as a result there is rarely need to irrigate during the season. Seven Springs Vineyard use clone 76 for their Unoaked Chardonnay. This clone’s typical organoleptic characteristics include peach and citrus. The yield is also higher than the clones used for the oaked Chardonnay.

Harvesting at optimal ripeness for the Seven Springs Unoaked Chardonnay, meant picking the grapes at lower sugar levels than for the oaked Chardonnay. This way the fresh fruit aromas and fresh acidity on the palate was retained. Picked early in the morning, with first sorting taking place in the vineyard, the fruit was processed to a clear juice and then inoculated with commercial yeast for a clean ferment. The yeast was specifically chosen to enhance and express the natural characteristics of the Chardonnay fruit.  After two weeks the alcoholic fermentation was complete and, like the Sauvignon Blanc, was left on the lees (dead yeast cells). The lees were stirred regularly to aid in the development of the mouth-feel of the wine.

This wine vied with others in the Seven Springs portfolio as my most enjoyable. Fermented and aged in stainless steel, it is its ripeness and lees contact that gives such a lovely aroma: crushed almond melds with lemon-meringue pie, all sorts of luscious hints, but with a core of steely precision. On the palate it is full-textured and weighty, with fat lemon and lime fruit and fruit-skin tang, lots of those waxy peel notes and lovely length and concentration. Hints of spices and honeyed sweetness play against savoury and decisive, dry acidity in the finish.

Description
Produced with no exposure to oak barrels, allowing full expression of the fruit from very young vines. It has a truly tropical perfume and personifies summer in a wine glass with aromas of pineapple and passion fruit. On the palate it is rich and textured with a lingering minerality balanced with beautiful fruit flavours.

Review
This is what Tom Cannavan from the UK wrote about the wine.
“As it says on the label, a Chardonnay fermented in steel tanks with no exposure to oak, and a new product in Seven Springs’ range, showing a restless need to explore the potential of their young vines and  this terroir. There’s an elegant perfume to this wine, with a little blossom or peach-skin fragrance, some dry apple fruit notes and a hint of something stony and mineral. On the palate it is juicy and  led by citrus and underripe apple – a quite steely, in some ways quite austere, but there is a burgeoning sense of creaminess and those peachy tones beneath the citrus tang. A nice wine that would be  joyous with some pan-fried mullet or seabass”
Unoaked Chardonnay 2011
Miguel Chan Wine Journal
Joanna Simon – Wine and Food
Colin Smith – Grapefan

Description
Aromas of apples and peaches with fresh lime on the palate ending with a crisp fruit acidity. This is what UK wine writer Jamie Goode had to say about the wine  –  ”Pure aromatics with some rich pear and peach notes as well as citrus freshness”  –   “a sophisticated wine of real quality”

Some of the video reviews of our Sauvignon Blanc 2010

Description
Our second Sauvignon Blanc vintage continues in the Seven Springs style. The wine has a delicate perfume, tantalizing ripe fruit on the palate with good lingering minerality. Enjoy ripe apples and peaches with hints of the natural vegetation of the area, fynbos , and fresh herbs. It is a light, refreshing wine.

Reviews
Leading South African wine writer Angela Lloyd wrote: “As pale and bright as one would expect of a young wine, it has great presence without being showy thanks to the purity and restraint of its more tropical style fruit. A year in the bottle has polished the edginess of extreme youth without diminishing the wine’s vitality and freshness, such attributes being enriched by lees ageing. This gives a sense of weight without lessening the gentle, pure fruit and clean, dry finish. Unlike many sauvignons, it’s just as happy enjoyed solo as paired with fresh, unfussy dishes. Ingrid agrees with me, describing it as gentle, charming and graceful.”

The wine is fresh and fragrant, with a delicate balance between crisp citrus, tropical fruits and subtle toasted oak. It is elegant with a crisp minerality stemming from the terroir and the cooling influences of the nearby Atlantic Ocean only 8km away.  A great food match with rich chicken and pasta dishes.

The start of the growing season was cool, with overcast days and regular showers. None of the customary gale force winds prevailed early in the season and the vines were able to flourish, but the southeaster was out in force throughout December. Little rain was recorded from mid-November, and with unrelenting heat from January onwards, Seven Springs relied on delicate and calibrated irrigation. The ripening period  was dry and warm.

The Seven Springs Chardonnay was fermented and aged in second and third fill, 300L barrels of which 20% was American oak and 80% French. These older barrels and absence of malolactic fermentation aids expression of the Chardonnay fruit. Fermentation was a combination of 40% wild and 60% inoculated with commercial yeast in the different barrels. After fermentation the wine was left to mature on the lees for 11 months to aid in the development of the creamy palate.

Planted in 2007, on South facing slopes at 220 meters elevation. The oaked Chardonnay is made from clones CY96, CY548 and P3, all of which have characters of citrus, peach and tropical fruits and have a very low yield.

This cuvée was fermented in second- and third-fill, 300-litre barrels, 20% American and 80% French, using a combination of wild and commercial yeasts. It aged a further 11 months on the lees in barrel. There is more overt oak influence than on the 2010, with toast and a whisper of Jack Daniels, all nicely nutty with a rounded lime and apple fruitiness beneath. On the palate it is a big wine with over 14% alcohol, but the acidity tempers that, and there is no sense of tropical über ripeness. There is good fruit sweetness through the mid-palate, and the oak does not dominate the finish, it adds only a gentle spice and buttery toast to the clean, mineral-etched flavours. A very different wine from the unoaked 2012, and delicious.